Honorary member of the ZfL, Professor emeritus of Art History and Media Theory at the Karlsruhe University of Arts and Design

Hans Belting, born on July 7th, 1935, died on January 23rd, 2023, was Professor of art history at the Ludwig-Maximilians-University, Munich from 1980 to 1992. From 1992 to 2002, he was Professor of art and media history at the Karlsruhe College of Arts and Design. From 2002 to 2003, he held the Chair of the European Department at the Collège de France and, from 2004 to 2007, he occupied the position of the director of the International Research Center for Cultural Studies (IFK ) in Vienna. He was a member of the Academy of Science, Heidelberg, and the Academia Europaea, Wissenschaftskolleg fellow, Berlin, fellow of the American Academy of Arts and Sciences, and member of the Order Pour le Mérite for Sciences and Arts. Hans Belting was an Honorary Member of the ZfL since 2006.

Hans Belting has contributed significantly to a fundamental revision of art history’s methods as well as to the field’s self-conception. He paved the way for the integration of interdisciplinary image studies into art history and articulated the relevance of image studies issues within cultural studies and, more recently, within the natural sciences. His prominence in the field stems from his innovative approach that aims to create interdisciplinary research networks between art historians, media studies scholars, and image studies scholars. His most recent work studied the roots of image studies in European cultural history on the one hand and the problems associated with new imaging techniques and scientific images on the other, such as those used in studying the brain. In his book Florence and Baghdad, Belting examined the use of perspective in Renaissance paintings as one that was derived from the Arab world’s mathematical theory of sight.

In 2015, Professor Belting received the prestigious Balzan Prize. Victor Stoichita addressed the reasons why Professor Belting deserved to receive this award which honors scholars working on the history of European art (1300–1700), citing Belting’s vital contributions to the study of the visible and the function of images in the Western world as well as his innovative and original interpretations of artworks between cultures and eras. Stoichita also noted Belting’s deep concern for the language of art and its significance for modern artists. From 2016 to 2019, the ZfL hosted a subproject of the interdisciplinary research project Iconic Presence. Images in Religion, led by Hans Belting and funded through the Balzan Prize.

Events with Hans Belting at the ZfL 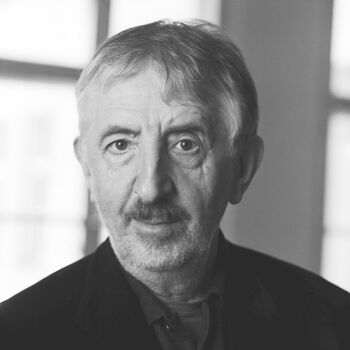