Honorary member of the ZfL, Professor of the Humanities, Senior Advisor on the Humanities to the President and Provost of the Harvard University (USA)

Homi K. Bhabha studied at Bombay University and at the Christ Church College Oxford, where he wrote his doctoral thesis on V. S. Naipaul. He has taught at many universities: Oxford, Sussex, Warwick, London, and Chicago, among others. He received numerous honorary doctorates. In 2012, he was awarded India’s national Padma Bhushan Prize for Literature and Education. Professor Bhabha has been an Honorary Member of the ZfL since 2015.

Homi K. Bhabha is famous for his new critical perspectives on the cultural practices surrounding exile, migration, and multiculturalism. His theory of a “third space” (as a spatially understood area of cultural difference) builds on ideas of hybridity, ambivalence, and cosmopolitanism. The Location of Culture (1994) solidified Bhabha’s position as one of the leading voices of post-colonialism, and many of his theoretical concepts have become central terms in present-day cultural theory. His work has had a strong impact on academic fields such as literary studies, cultural studies, art history, and the social sciences. It has also inspired public debates on matters of integration and interculturality.

In 2015, Professor Bhabha received the Alexander von Humboldt research award after being nominated by Sigrid Weigel. In his accompanying research stay at the ZfL, Bhabha, in collaboration with researchers at the ZfL, studied Hannah Arendt and her work, specifically the interconnections between Arendt’s theory of the in-between and his concept of the third space.

Events with Homi Bhabha at the ZfL 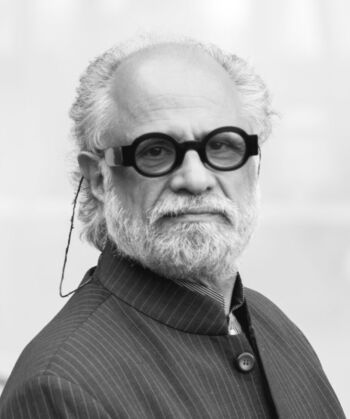