Figurations of the Barbaric in the 18th Century. A Genealogy of the Concept of Culture in International Law, the Philosophy of History, and Literature 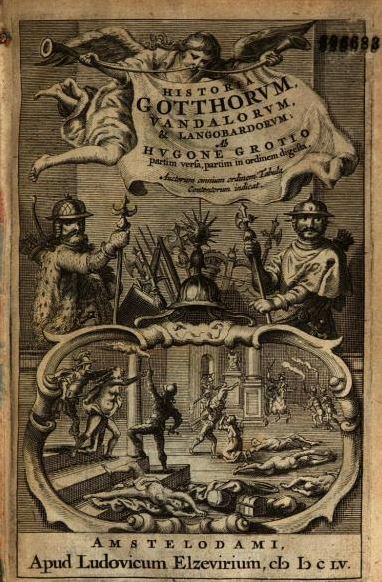 Up into the 20th century international law existed merely as ‘culture’ because the institutions behind it lacked executive force. It remained a deterritorial dispositive of customs, history, and power. The cultural nature of international law contrasts with the universal and natural principles at work in the classical texts of its founding (Grotius, Pufendorf, and Vattel, among others). At the same time, these authors were already well aware of how ‘culture’ can upset and unsettle the law. The ‘imperial’ aspects of international law, such as the theory of sovereignty and the rule of reason, go hand in hand with an interest in the legal customs of ‘barbaric’ peoples, as Grotius’ study of the history of the Goths, Vandals, and Lombards demonstrates. This interest, to be sure, has colonial implications that have already been researched in part by post-colonial scholars. Still, the source texts concerning the legal customs of European ‘barbaric’ peoples offer a limitless archive for reflecting on the connection between law and culture – even though the texts do not necessarily adhere to an explicitly articulated concept of culture. The historical understanding of cultures is thereby always interconnected with a strong imaginative fascination with the barbaric. In looking to authors such as Vico, one can study how a new theory of culture emerges through the negotiation of the universal and the cultural in the context of the ‘barbaric,’ a negotiation that plays out in exemplary fashion in the Roman ius gentium.

The project seeked to describe the discursive interconnections between international law, the concept of culture, and the philosophy of history. This description focused on the 18th century as the historical saddle point and the figure of the barbarian as the interdiscursive actant, who takes on important yet varying functions in all three discourses. Literary representations of barbarians were examined alongside legal texts and others on the philosophy of culture that dramatize the complex situation sketched out here. The Hermannsschlacht (Battle of the Teutoburg Forest) dramas provided one focal point, in which the theme of international law is explicitly and repeatedly dealt with. Furthermore, the project aligned with recent endeavors in the research area of “literature and law” to advance a theoretical model for the concept of ‘culture.’