The contributions of this issue were initially given as lectures at the conference Goethes Zeitkonzepte, which took place at the ZfL in November 2016. The conference was financed with funds from the project Time and Form in Motion, a subproject of the German Research Foundation’s Priority Programme 1688 »Aesthetic Proper Times. Time and Representation in Polychronic Modernity«, which investigated the afterlife of Goethe’s morphology in 20th century theory formation. 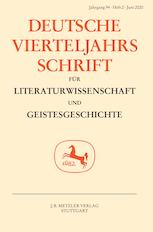