Embodied Simulation and the Coding-Problem of Simulation Theory. Interventions from Cultural Sciences
Lecture by Sigrid Weigel held at the 12th International Neuropsychoanalysis Congress »Minding the Body« in Berlin, June 24-26, 2011

Prologue
I would like to start off my cultural-historical intervention with a trouvaille from the Denktagebuch, a sort of intellectual notebook, of Hannah Arendt, the famous German-Jewish philosopher (1906-1975). Arendt’s publications include a most profound book on the Human Condition (1958, in German Vita activa, 1960) in which she develops the idea of acting/ Handlung as the crucial realm of intersubjectivity and humanity. This realm is based in the space between human beings, a literal inter-est of togetherness. It is only in this space, only in the relationship to others, that the full sense of the Self, including the involuntary expressions of the person, manifests itself. It is the same realm in which the moral, social and political life is created. 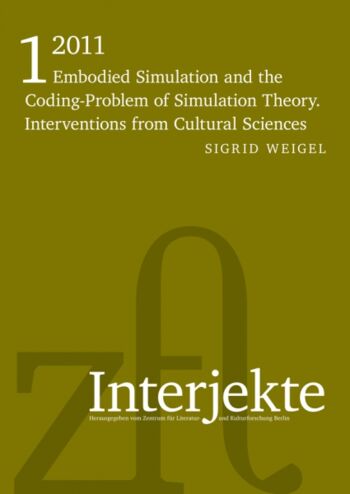