The reception of Walter Benjamin’s works is traversed by a paradox: although there is a consensus that he developed his concepts in ‘close contact’ with the respective material, his writings are often read with no independent study of his sources, a reading that is thus detached from the respective context of problem and debate. This reinforces the impression of an esotericism in his texts, and it may lead to the assumption that Benjamin arbitrarily takes motifs from his study of materials and sources and uses them as a vehicle for a form of thinking that, in itself, is not easily ascribed to any kind of tradition.

The authors in this volume focus primarily on Benjamin's material, be it literature, theater, metaphysics, philosophy of law and morals, magazine projects, social movements, or urban architecture. By looking at texts from different phases of Benjamin’s work, they examine the relationship between material and concept from both perspectives. This approach allows for further analysis of theoretical relationships and work contexts that have so far been ignored.

The contributions in this volume were developed at the Walter Benjamin workshop “Material und Begriff. Arbeitsverfahren und theoretische Beziehungen Walter Benjamins” for young scholars that took place at the ZfL in March 2017 (see below). 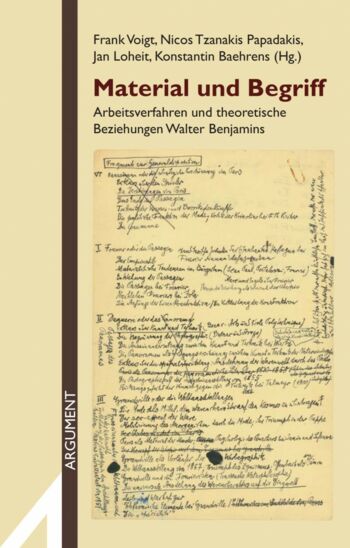