The concepts of rhythm that arose in the late 18th and early 19th century from poetological and aesthetic discourse as well as literary experiments with verse meter continue to shape the analysis of versified texts today.

Here, versified texts by Friedrich Gottlieb Klopstock, Friedrich Hölderlin, Novalis, Ludwig Tieck, and Johann Wolfgang Goethe are explored in terms of how they engage with metrical forms and which ideas of rhythm are subsequently developed. Rhythm thus emerges as a figure of thought in which core questions of poetological discourse around 1800—the laws of literary form, the relationship between poetry and prose, the differentiation of genres—are negotiated.

In the analyses, each example takes on a differentiated view of the conceptual landscape spanning rhythm, meter, and beat. This shows that such literary experiments with metrics around 1800 formed both the basis for the absolutization of rhythm in modernity and the re-conceptualization of meter in modern literature. 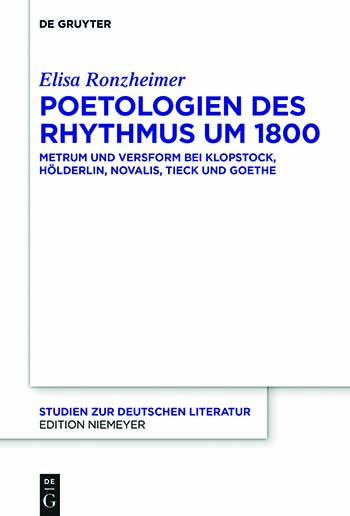