“Prophetic politics” is the proclamation of a radical change expressed in religious language at a time of deep existential and political crisis. The term brings together two distinct fields: The first is the prophetic, a medium in all religions, usually represented by an individual who is said to be the mouthpiece of the divine. Whether pagan or monotheistic, male or female, ancient or modern, the prophet is always the teacher and the critic, instructing and scolding, never afraid to express his or her opinion, even when it puts her life at risk. The second field is that of politics. Based on the idea of the polis and the politea, it has stood, since Thomas Hobbes, for the relationship between the people and the sovereign within the body politic. Held together by unifying obligatory relationship, politics overcome the primal state of fear and war of “all against all” in “the state of nature.”

This special issue concludes a series of workshops funded by the DFG (Deutsche Forschungsgemeinschaft). The three workshops, which took place in Berlin and New York from 2018 to 2019, gathered an international group of researchers interested in the intersection of history, religious studies, and literature and straddling the three traditions of Judaism, Christianity, and Islam. The group focused on clear states of crisis in history and in politics: the biblical clashes between prophets, kings, and people, Medieval confrontations between the prophetic and the legal traditions, and modern confrontations between the prophetic tradition and the rise of authoritarian secularist regimes, which can be seen as forerunners of more contemporary clashes between political systems and reformatory prophetic rhetoric. Such rhetoric is clearly evident in the twentieth century, for example in Weimar Germany, the American Civil Rights movement, and in the recent confrontation between democracy and its rivals. A sober estimate of the field cannot be achieved by engaging only with biblical, Jewish, Christian and Muslim prophets, nor by limiting their political and public contexts. Rather, our claim in this issue is that prophetic politics serves as a better trope to examine the complexity of the historical, political, and rhetorical circumstances within the field recognized as political theology. The emphasis of prophetic politics on counter-institutional rhetoric and sentiment lets a new form of theorization to emerge.

(Extract from the introduction by Nitzan Lebovic and Daniel Weidner) 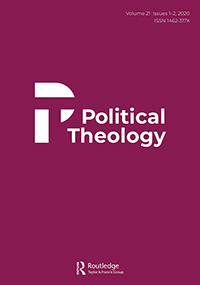