In the late Enlightenment, a new imperative began to inform theories of interpretation: all literary texts should be read in the same way that we read the Bible. However, this assumption concealed a problem—there was no coherent “we” who read the Bible in the same way. In Secularism and Hermeneutics, Yael Almog shows that several prominent thinkers of the era, including Johann Gottfried Herder, Moses Mendelssohn, Immanuel Kant, Georg Wilhelm Friedrich Hegel, and Friedrich Daniel Ernst Schleiermacher, constituted readers as an imaginary “we” around which they could form their theories and practices of interpretation. This conception of interpreters as a universal community, Almog argues, established biblical readers as a coherent collective.

In the first part of the book, Almog focuses on the 1760s through the 1780s and examines these writers' works on biblical Hebrew and their reliance on the conception of the Old Testament as a cultural, rather than religious, asset. She reveals how the detachment of textual hermeneutics from confessional affiliation was stimulated by debates on the integration of Jews in Enlightenment Germany. In order for the political community to cohere, she contends, certain religious practices were restricted to the private sphere while textual interpretation, which previously belonged to religious contexts, became the foundation of the public sphere. As interpretive practices were secularized and taken to be universal, they were meant to overcome religious difference. Turning to literature and the early nineteenth century in the second part of the book, Almog demonstrates the ways in which the new literary genres of realism and lyric poetry disrupted these interpretive reading practices. Literary techniques such as irony and intertextuality disturbed the notion of a stable, universal reader's position and highlighted interpretation as grounded in religious belonging.

Secularism and Hermeneutics reveals the tension between textual exegesis and confessional belonging and challenges the modern presumption that interpretation is indifferent to religious concerns.

“Almog does not provide simple answers, but the questions posed by Secularism and Hermeneutics reach well beyond the work’s immediate subject matter. Scholars of the Enlightenment, religious studies, world literatures, and critical theory will not be able to overlook Almog’s contribution.”
Brandon Bloch, German Studies Review 44.2 (2021) 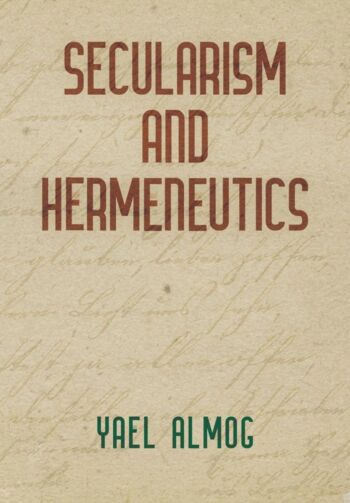 01 May 2021
Secularism and Hermeneutics