Starting with the essay on Proust published in 1929 the technical term Eingedenken plays a crucial role in Walter Benjamin’s writings. However a thorough research about this concept is still lacking in the immense literature on his thought. The principal aim of this doctoral thesis was to fill such lack by providing a vast and meticulous analysis of the meaning of Eingedenken in Benjamin’s work. The opening chapter shed light on the origins of this very peculiar and unusual German term: as a matter of fact it was Ernst Bloch, not Benjamin, who invented this concept in his first major book, Geist der Utopie (1918). By forming this bizarre noun from the phrasal verb “eingedenk sein,” Bloch tries to outline a utopian experience: an act by which the subject brings to light some potentialities hidden in a forgotten past. Benjamin not only read the first edition of Geist der Utopie, he also wrote a review of the book which is unfortunately missing. On the basis of his letters we argued that although he rejected Bloch’s gnostic metaphysics, Benjamin was deeply influenced by the idea of Eingedenken. This concept plays a central role in the method of the Passagenarbeit as well as in “On the concept of history,” Benjamin’s last text. Following the chronological development of Benjamin’s work I thus examined the different meanings the term Eingedenken assumes: the connection with the concept of Erwachen in the first drafts of the Passagenarbeit, Proust’s idea of “mémoire involontaire” and its translation by Benjamin with “ungewolltes Eingedenken,” the theory of quotation (Zitat) in the essay on Kraus, the specific logic of remembrance in the Berliner Kindheit, the idea of “Studium” in the essay on Kafka, the difference between recollection, memory, and Eingedenken in the essay on the Storyteller, and finally the salvation of the idea of Eingedenken in the essays on Baudelaire as well as in the thesis on the concept of history. Benjamin’s Eingedenken has to be seen not as a concept with an unambiguous meaning, but as a “Denkfigur” or an “idea” in Benjamin’s sense. 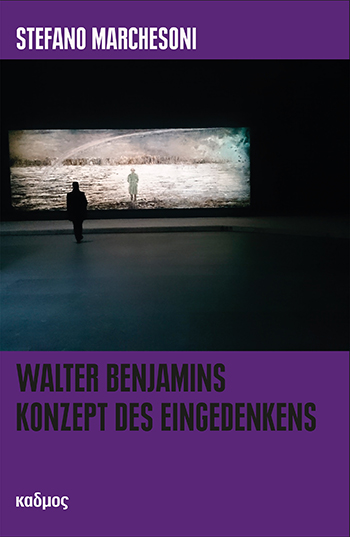