The Carlo Barck Prize is awarded every two years by the ZfL to promote young researchers. It honors dissertations in the field of literary and cultural studies that pose innovative questions and display original conception. The prize money of 10,000 Euros is awarded as a six-month fellowship at the ZfL.
The scholar of Romance literature Karlheinz “Carlo” Barck (1934–2012) investigated the history of aesthetics and imagination since the 18th century, focussing on the French and Spanish avant-gardes of the early 20th century. He always supported the interdisciplinary opening of literary studies to other arts and cultural practices. Under his leadership, the development and publication of the Ästhetische Grundbegriffe, a ten-year dictionary project exploring the histories of aesthetic concepts, was achieved. It was begun at the Central Institute for Literary History of the Academy of Sciences of the GDR (the predecessor of the ZfL) and was continued after reunification in cooperation with colleagues from East and West. Barck was one of the leading figures of the ZfL and played a major role in shaping its research program. His encyclopaedic erudition, intellectual curiosity and open nature, will be a lasting memory. 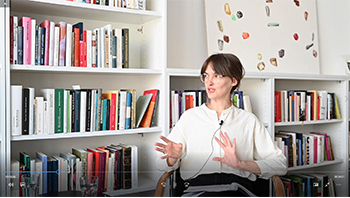