Figurations of the Martyr in Near Eastern and European Literature

The project was a cooperation in three research phases between the ZfL and the Seminar for Semitic and Arabic Studies at the FU Berlin.

The first project phase adopted a comparative perspective on martyr traditions in various religious-cultural contexts. The comparative approach drew upon the 2002–2004 pilot project conducted at the Berlin Wissenschaftskolleg. With the goal of dispelling the hermetic conception of Islam as a homogenous religion with an established dogma, our research focused on the historical differentiation of the diverse martyr traditions of Islam. This orientation was initiated in order to question traditional historical models of martyrdom and to highlight specific religious-cultural upheavals and exchanges among various religions. Our main interest lay in specific historical formations of the martyr in terms of praxis, self-definition, and cultural memory as well as historical, poetic and visual representations. The methodological concept of figuration provided a scope that included concrete (historical, mythic, and fictional) figures. Such figures embody and give shape to aspects of the martyr’s specific meaning and to the cultural practices that contribute to the formation of distinct martyr representations.
The martyr appears as a figure on the edge, capable of both splitting religious traditions apart and bringing them together. The martyr takes on contours within the negotiations that take place in specific historical constellations and cultural contexts. The martyr figure is thereby subject to numerous changes within religious traditions. It is not only possible to describe the synchronic component of how the martyr serves as a mediator and medium between various religious cultures, but it also becomes necessary to look at the diachronic development of the martyr as intermediary between reputedly distinctive historical periods. In this manner, the martyr becomes a figure that transgresses and calls into question the boundaries between pre-modern and modern as well as between “religious” and “secular” societies.

Subprojects:
Figurations of the Martyr in Early Sunni Texts (Silvia Horsch)
The figure of the Sunni battlefield martyr (shahid al-ma‘raka) from early Islam takes shape through a process of opposing movements between differentiation and appropriation. This figure attests to a practice that is different from that of (early) Christianity even when the term remains the same (the Arabic word shahid, like the Greek word martyrs, refers to both witnesses and martyrs): enduring persecution and torture versus joining a battle unto death. In the figure of the Sunni battlefield martyr, various elements of Christian martyrdom are rejected while others are incorporated. At the same time, ancient Arab concepts of battle and death transform through the martyr figure, giving way to new concepts that establish jihad and martyrdom as preconditions in certain traditions. The texts on martyrs from various historical configurations and different genres appeared at the junction between the theology of the Koran that is opposed to myth and mythologizing narratives.
Martyrs in the Babi-Religion (Sasha Dehghani)
While capable of being defined through their continuity or discontinuity with Twelver Shī'ism, the martyrs of the Babi-episode may also be described as figures on the edge. While some Babi martyrs died peacefully without violence, others died in a bloody battle in defense of their new faith. This battle also exposes the paradoxical nature of the Shi’ite hope for the coming of the messiah: the messiah as the forger of the new Imām ideology versus the messiah as an abrogator of the past. This latter figuration of the messiah was especially important during the second half of the Babi’s period of influence and in fact led to religious-political scandals that culminated in the collective martyrdom of the Babi-community.
The Alevi Martyr of Modernity (Michael Heß)
The Alevi denomination displays signs of Shi’ite influence. Husain (who died in 680 CE), the grandson of the prophet Muhammad and third Shia Imām, figures into Alevi literature as the symbol of a pure, guiltless martyr massacred by tyrants. The Alevi reinterpretations of Husain as the traditional martyr figure emerge out of the multiple connections between the execution of Husain and events from recent Alevi history, which are also seen as part of their martyrdom, including, for example, the mass murder of Alevi intellectuals in Sivas in Eastern Turkey in 1993. These reinterpretations include modern stylizations of Husain as a champion of human rights and the enlightenment. In this manner, the martyr line of continuity extends into the secular realm.

Conceptions of Martyrs in Zionism (Helen Przibilla)
The subproject investigated another variation in how the martyr discourse, which was initially religious, gets incorporated into the rhetoric and symbolism of a secular movement. The stock character of the martyr who actively resists and fights unjust foreign rule is associated with the revolt of the Maccabees (2-1 BCE). This character has been revitalized in the image of the “militant Jew” in Jewish modernism, which invokes the Maccabee tradition of resistance against tyrants for the national justice of the Jewish people. The mass suicide of the entrapped Jews in Fort Masada is similarly influential (73 CE). From the beginnings of the Jewish national movement around 1900, both figurations of the militant “Jew” live on in representations of present-day martyrs in Israel as depicted in Jewish national literature and symbolism.

Martyrs in Baroque “Trauerspiel,” with Special Regards Towards Oriental Theatres (Sabine Berthold)
The Baroque interest in martyrs evolves from the religious and Turkish wars of the 16th and 17th centuries. Baroque “Trauerspiel” becomes the stage upon which religious-historical conflicts are decided and where historical experience gets transformed into salvation histories. In addition to the antagonism between the Catholics and Protestants, Baroque drama also portrays the tension between Christianity and Islam. In these texts one witnesses the enactment of hostile relations between martyrs and tyrants. As a result, a narrative of “orientalism avant la lettre” becomes apparent and can be found in the Turkish plays of Lohenstein or the dramas of the Silesian Baroque poet Andreas Gryphius.

The ‘Afterlife’ (Nachleben) of Traditional Martyr Cultures in the Present

The second project phrase, which commenced in 2009, addressed the legacy of traditional martyr cultures in the present. The prominent role that martyrs play in current conflicts in the Near East is often described from a European perspective as a regression to pre-modern concepts or as the expression of Islam’s incapacity to change. However, the martyr has not disappeared from the secularized societies of Western Europe nor from the secular movements in the Near East. Indeed, the martyr endures in a variety of forms and contexts be they nationalist, socialist, Zionist, or others. Even when martyrs are decidedly framed as part of an “Islamic” tradition, their reception within modern ideologies has left traces that are, in turn, part of a transformation that continues to be passed down over the centuries.

Subprojects:
On the Defeat of the Militant Jihad and Transformation of the Martyr-Figure in the Bahá'í Faith (Sasha Dehghani)
Building on the results of the subproject “Martyrs in the Babi-Religion” from the first project phase, this subproject investigated the non-violent martyr figure in the Bahá'í religion. These figures correlate more closely with the martyr as figured in ancient Christianity than with that of contemporary Twelver conceptions of martyrdom. Without the context of persecution, martyrdom in the Bahá'í belief system seems inconceivable. Therefore, this subproject aimed to address the religion’s adversarial position that seeks to legitimize the persecution of the Bahá'ís in Islam territory.

Re-stagings of Islamic Traditions in Modernity. In the Martyr’s Battlefield (Silvia Horsch)
With the research results from the corresponding subproject on early Sunni texts in the first research phase, this subproject further explored the afterlife (Nachleben) of the martyr figure in the works of modern Islamic authors. It considered specifically the reception, adaptation, and reinterpretation of the figure by writers who see themselves as representatives of the “native/original” and normative Islam.

Martyrs on the Stage. Performing Martyrdom in Ta'ziya as Shi'a Theater-Ritual (Maryam Palizban)
The figure of the martyr in the Shi’ite tradition has been significantly shaped by the events that took place in Karbala in 680 CE, when Husain, the grandson of the prophet Mohammad, was killed alongside his family and followers. Shortly thereafter Husain’s fate and the tradition of mourning his death became key elements in protest movements throughout the entire Islamic world, especially with non-Arab Muslims who suffered under whichever Caliph was in power at the time. With the political success and cultural power that the Shi’a gained during the Safavid dynasty (1501–1722) also came the first fictionalizations of the events in Karbala and the transformation of what was originally a ritual of mourning and sacrifice into a theatrical ritual of martyrdom (ta’ziya). This tradition remains today one of the main public events performed during the Islamic months of mourning.

The popularity of ta’ziya as a folkloric phenomenon persists without signs of wavering any time soon, even while the respective ruling-class cultures tend to identify with the tradition only remotely if at all. Indeed, it is not uncommon for political or religious authorities to ban ta’ziya. In this respect, martyr figures and their on-stage identities are particularly striking. In addition to the specific characteristics of martyrs within the Shi’ite tradition, especially in Iran, the project also investigated the variations in meaning and significance when martyrdom is presented on stage by a collective (the performers) and, at the same time, for a collective (the audience). Martyrdom is conceived of as a performative phenomenon in the ta’ziya tradition, as something that has more to do with the cultural presence of the martyr than with how the martyr is portrayed on a textual level. 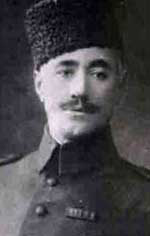 The First World War extended far beyond the borders of Europe, consequentially interrupting democratization processes in the Near East. Prior to and during this period, a multitude of traditional political and cultural concepts and ideas were newly conceived, tested, and moreover altered. One of the more striking and representative cases is that of the Jangal movement [Jungle movement], an insurgency that led an uprising against, first, the Russian and, immediately thereafter, the British Army by the Caspian Sea of northern Iran. As leader of the Jangal movement, theologian Mirza Kuchak [Mīrzā Kūčik Ḵẖān] issued the proclamation founding the independent Soviet Republic of Gilan. The uprising was quelled in 1921, and the movement lost its lead figure with Kuchak’s beheading. 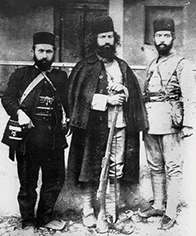 The self-chosen martyrdom of this period was not limited to local or Muslim members, but also included former German and Austrian soldiers who deserted their posts to join the movement. Never before have nationalist, Islamic, Shi’ite, and socialist martyr cultures been so intertwined, as in the case of the Jangal movement.

The project investigated the specific changes in martyr culture in the First World War with regard to the formation and expansion of this movement. It engaged with texts and images of the period pertaining to this movement, and investigated their basic pattern, which persists in the current Shi’a (and especially Iranian) cultures of martyrdom.

Martyrdom in the Modern Middle East

Traditions of Martyrdom in the Modern Middle East