Adornos Lächeln
Das »Glück am Ästhetischen« in seinen literatur- und kulturtheoretischen Essays
[Adorno's Smile. The “Joy of Aesthetics” in his Essays on Literary and Cultural Theory]

Adorno’s works constantly revolve around the question under which conditions the possibility of a better and more just life is given. If we take happiness as the starting point of Adorno’s thinking seriously, then the significance of art lies in revealing a different, more fulfilling world. Based on this observation, the author investigates which qualities, according to Adorno, works of art must display in order to articulate the promise of happiness. Combining the inquiry into the production of art with a perspective that centers the aesthetics of reception, she focuses on the joy of aesthetic experience itself.
It is precisely in Adorno’s essays on literary and cultural theory, including those on Beckett, Kafka, Hölderlin, Helms and Goethe, but also on the lightheartedness of art and kitsch, that elements of a theory of happiness can be found. These, according to her thesis, were fundamental for Adorno’s entire thinking. Through the historical contextualization of his essays, Groß puts the “joy of the aesthetic” at the center of Adorno's work and shows that for him, the success of art depends solely on whether it harbors inherent potential for happiness. 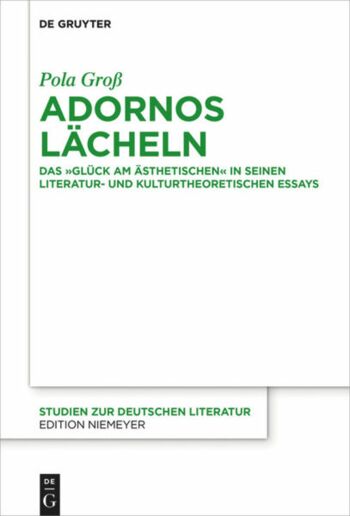