Its contents were supposed to have “consequences”: With this claim, a small literary magazine developed into a widely and highly regarded medium for theory discussions in humanities around ’68.’ Published in West Berlin by literary scholar Hildegard Brenner, alternative became a place for intellectual discoveries and rediscoveries: The red-and-black “Arbeitshefte” brought to light aesthetic traditions from the period of the Weimar Republic and the time of exile, introduced their readers to theories of Western Marxism as well as French structuralism and feminist psychoanalysis, documented literary-political debates in East and West, and observed the social movements of their time.

The journal’s editors understood themselves as part of a “revolt within the superstructure”—until, during the left-wing decade of crisis in the 1970s, the failure to meet the hopes and demands of ‘68 increasingly became the alternative’s main subject of discussion. The study reconstructs and compares the work of these editors in the context of New Left media and ideas, and it retraces the way in which the “journalistic form” of publishing in periodicals became an important factor in the education and self-formation of a political-intellectual generation. 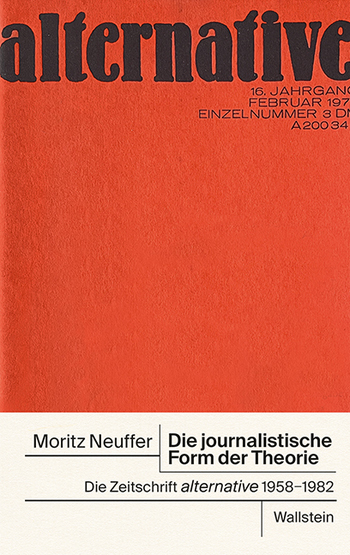