Translated from Russian by Gabriele Leupold, edited by Franziska Thun-Hohenstein.

For Varlam Shalamov, one of the great writers of the 20th century, letters were an indispensable medium to reflect on experiences, readings, films, or exhibitions, on his poems and prose, on the nature of poetry and literature in general. Letters were able to bridge spatial distances—from 1952 to 1953 between Shalamov himself in Siberian Yakutia and Boris Pasternak in Moscow or in the summers of the 1960s between him in Moscow and Nadezhda Mandelstam in the countryside. As the years went by, letters increasingly became the deafened writer’s alternative to spoken conversation. When his Kolyma Stories circulated within the informal circles of the Samizdat but there was no possibility for Shalamov to engage in conversation with his readers, he found letters to be the ideal medium by which to explain and express himself. Thus, his correspondences give many-voiced, often-times surprising insight into his life, his writing, and decades of literary life in post-war Moscow. 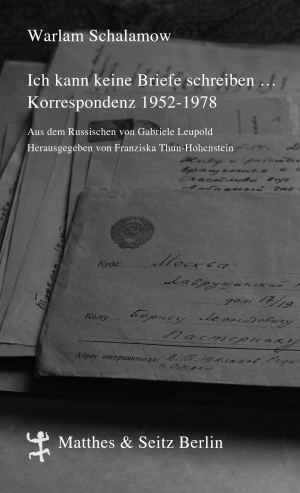