Susanna Paasonen: Infrastructures of Intimacy and the Deplatforming of Sex

Lecture by Susanna Paasonen (University of Turku) as part of the online lecture series Intimacy, with Ben Miller and Georg Dickmann

Susanna Paasonen’s feminist and queer analysis focuses on the question of online pornography and new ways of connecting via platforms and chatrooms, as in her 2011 Carnal Resonance: Affect and Online Pornography. Taking exception from the prevalent techno-skepticism that summarizes online communication and representation uncontestably as forms of commodification and alienation, Paasonen’s talk “Infrastructures of Intimacy and the Deplatforming of Sex” discusses the stakes of the new potentials of getting together online—aesthetically, socially, sexually, and politically. For Paasonen it is the tactile dimensions of online encounters, more so than the visual, that affect us as ‘resonance’ or ‘grasp’ us.

This lecture series takes queer theory’s conversation about intimacy as a starting point to discuss some of its cultural possibilities, mediated forms, and philosophical trajectories in the context of Corona. It is part of the public program of the exhibition Intimacy: New Queer Art from Berlin and Beyond at Schwules Museum.

In cooperation of the ICI Berlin, the ZfL research project Neighborhood in Contemporary Berlin Literature and the Schwules Museum. Supported with funds form the Capital Cultural Fund (HKF).

Fig. above: © Spyros Rennt: Hanging out at Ludos, 2020 (detail), part of the exhibition “Intimacy: New Queer Art from Berlin and Beyond” at Schwules Museum 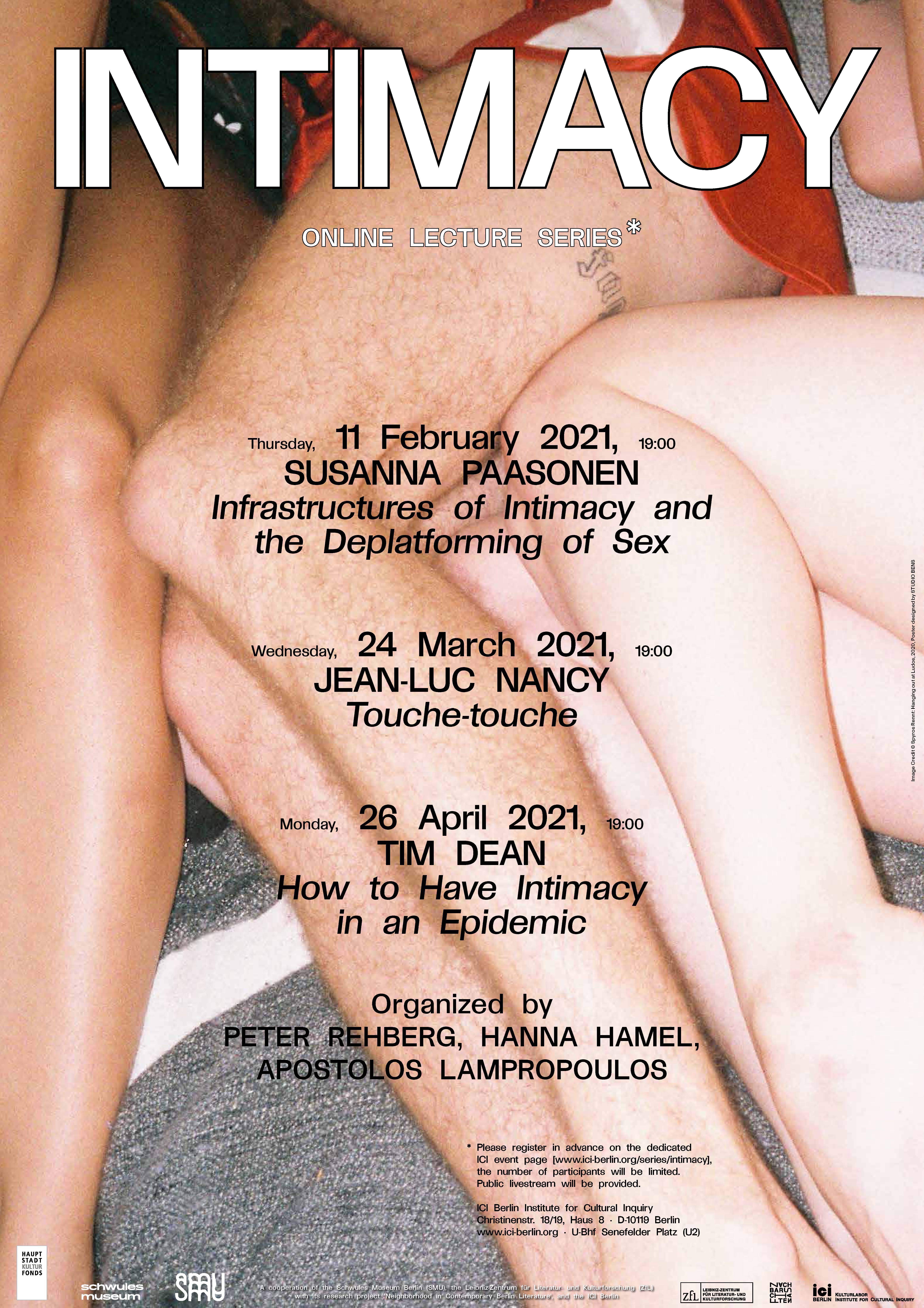 In the time of Corona, intimacy is precarious: as an experience we are in danger of losing, but also one we are nostalgically mourning or re-imagining for a future to come. What does a pandemic and its cultural, social, and technological consequences, such as the protection from others and the disappearance of social encounters and bodily contact, teach us about intimacy? How does Covid-19 change our understanding of intimate moments?

In the context of queer culture and theory, intimacy has had a peculiar position for quite some time. For intimacy is not necessarily the scene in which identities are formed or affirmed. Queer theory has emphasized intimacy as a site where identity is left behind and new forms of the self can emerge, for example in forms of public sex, or what Leo Bersani calls ‘impersonal intimacy.’ One might say that intimacy itself is a queer phenomenon.

Full program of the lecture series

Thursday, 11 Feb 2021, 19.00
Susanna Paasonen: Infrastructures of Intimacy and the Deplatforming of Sex