Establishing epochs, determining their thresholds, and identifying ‘epochal events’ is generally a matter of hindsight. Antiquity, the Middle Ages, Weimar Classicism, the Victorian Age, and many others are post festum constructions. However, calling the close or the beginning of a new epoch has more to do with prognostics and tends to serve diagnostic purposes in the present. This is what we are currently witnessing. The Covid-19-pandemic is already being interpreted as a sea change on a global scale. Over the past year, the phrases ‘before’ and ‘after Corona’ have become omnipresent, and this, although an end of the pandemic is not yet in sight, with newly emerging mutations beginning to complicate the situation.

While some may feel that this has come over us abruptly and unexpectedly, it is well known (though frequently denied, especially by conspiracy theorists) that this pandemic is neither a stroke of fate nor a natural disaster. Covid-19 is very directly related to globalization and to climate change. Many are now calling for a change in our ways of acting and thinking, though there is no agreement on what exactly should be done, let alone where to start. Admitting as much ought to be a matter of intellectual honesty. But honesty is not held in high esteem, neither by politics nor by contemporary historiography or certain public intellectuals. In his post “The Loss of Sovereignty in the Pandemic” on the ZfL blog, Henning Trüper recently examined the paradoxes and pitfalls of our efforts to seek orientation. While it may be too early to determine whether the pandemic indeed marks the beginning of a new epoch, we cannot doubt that it falls squarely within the Anthropocene, the epoch officially confirmed by scientists in 2016. With the Anthropocene, traditional distinctions between epochs measured by human time and epochs measured by geological time have all but disappeared.

In any case, not knowing whether we are in the midst of a sea change, at the beginning of a new or the end of an old epoch is nothing new. Such uncertainties and ambivalences are the very reason we take recourse to the concept of epochs. Epochs can be understood either as following their own course and logic (even if those are attributed ex post), or they can be instrumentalized to ‘ring in a new age.’ In either case, present concerns and future plans are at stake. References to epochs thus have the potential to illuminate and clarify things but also to obscure and occlude what was, is or will be. This is their dilemma.

Instead of deciding what speaks for or against a current sea change or a new epoch, we want to take a step back. For the next three semesters, current events, debates, and speculations are taken as an occasion to reflect more generally on the concept and the use of epochs as a technique of periodization in different contexts and under different circumstances. In their contributions to our brochure, Pola Groß, Ernst Müller, and Henning Trüper address the subject from their respective research perspectives. Perhaps it is no coincidence that all three deal with epochal changes in modernity, an epoch more contested and uncertain than most.

The fact that epochs are always provisional constructs that shed light on some things while concealing others is not sufficient to abandon them as illegitimate altogether. It is precisely their constructed character that allows for an ever-changing history of ascribing, defining, and redefining epochs. The traditional tripartition of Antiquity, Middle Ages, and Modernity has, for instance, been stirred up by the ‘long Middle Ages’ and the emergence of the ‘early Modern Age.’ The question of epochal turns, epochal upheaval, or epochal change poses a constant challenge. Historians of the 20th century, for example, have focused primarily on transitional periods and epochal thresholds. Koselleck’s Sattelzeit has itself become an epoch spanning 100 years (1750–1850). In recent decades, less colorful substitutes for epochal units such as the ‘long 19th century,’ the ‘short 20th century’ or early, high, late, post- and post-postmodernity have abounded. These are some of the issues that will concern us in the near future.

What we need now more than ever, for our scientific activities and beyond, is calm, prudence, solidarity, and: distance. (“Distance” is also the theme of the ZfL Literature Days organized with the Literaturhaus Berlin for June 2021.)

2020 also marked Hegel’s and Hölderlin’s 250th birthday; it came and went almost unnoticed. The decisive epochal rupture for Hölderlin was the French Revolution. His late poems, however, revolve around the seasons. A poem from the time of his supposed madness, entitled “Spring” begins with these verses:

This text initially appeared in German and in a slightly different version as editorial in the brochure of the annual theme of the ZfL 2020/21: EPOCHAL TURNS. 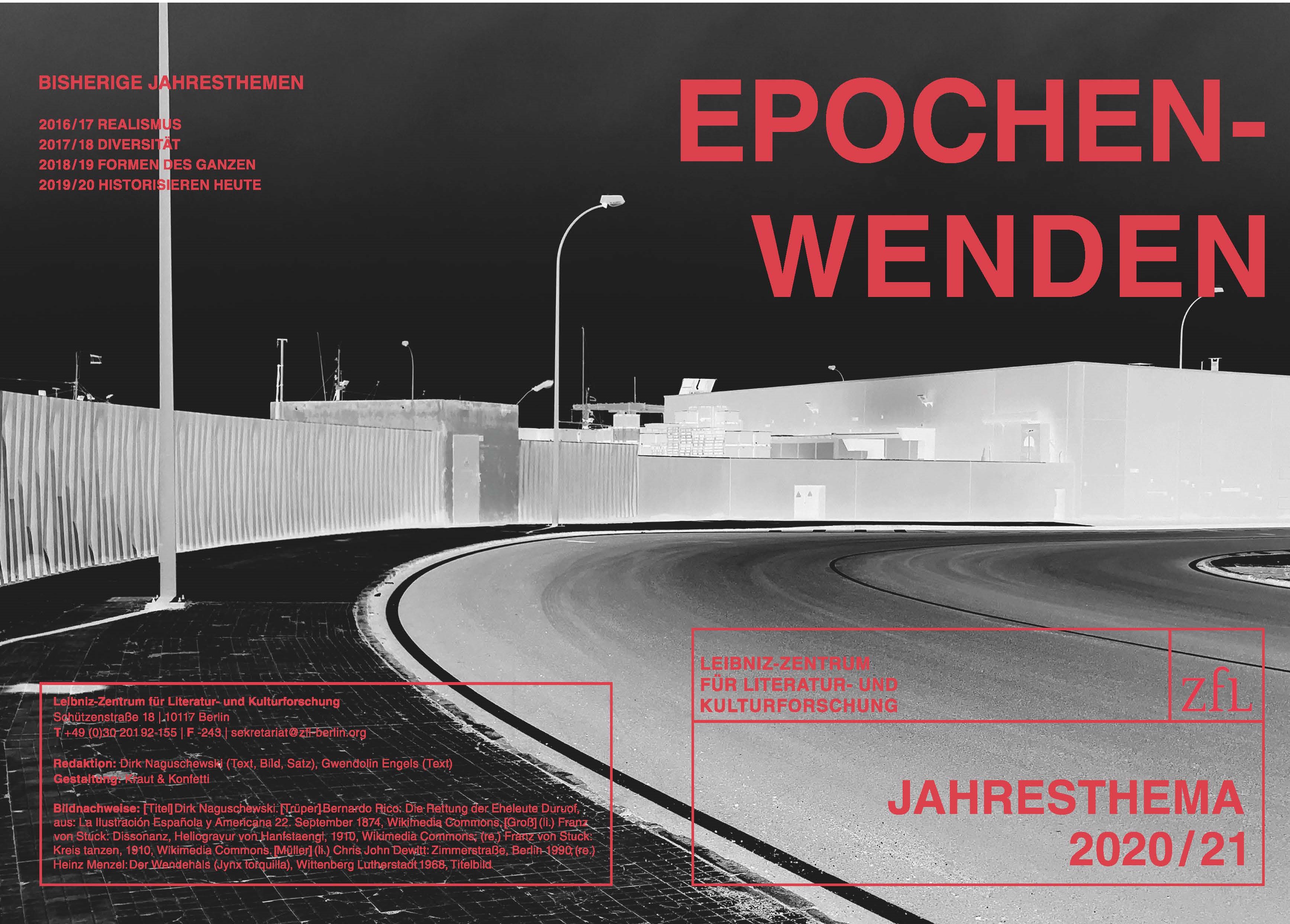