Though Brecht called it “one of the greatest humoristic works of world literature,” Hegel’s Science of Logic is the dark heart of the Hegelian system. While his Philosophy of Right and even his Phenomenology have returned to intellectual debates in recent years, his Logic—one of philosophy’s major works—remains mostly unread. Colossal and difficult to penetrate, the book has not been discovered by the world beyond academia.
Patrick Eiden-Offe has subjected himself to the exercise of studying the Logic consistently from beginning to end. For one hour every morning, his reading of the Logic evoked surprising and at times touching experiences, experiences lost in its mere appropriation through secondary literature. In the process, he discovered a Hegel whose radical thinking pushed him to develop his own, hermetic language, comparable only to Hölderlin’s; a Hegel who seeks to “get to the bottom” of the matter itself and—in the end—can only record how it “perishes.” And a Hegel whose philosophy bears traits of a pitch black humor. Reading the Logic becomes a self-experiment, as does writing about it. Ultimately, the Science of Logic appears like an essay itself, one that consoles the modern soul and, as such, is undeniably topical. 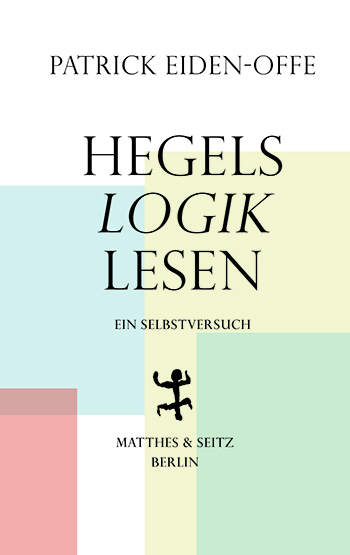