Jacob Taubes was a scholar whose interests ranged from Judaism to Western philosophy: from Parmenides to Marx and from Kierkegaard to Heidegger and Benjamin. Or, as Taubes himself used to say: “From Ionia to Jena.” He was an existential thinker who understood his epoch as post-apocalyptic while also noticing parallels to late antiquity and its strife between Christ and the Roman emperors. He utilized his religious-historical findings as an arsenal composed of figures and constellations in order to change his present. He chose to pursue this scholarly program, being as alienated from Modernity as Antiquity’s Gnostics were from their historical era. Taubes was also a gifted polemicist. He was never afraid of an altercation, but also understood to appreciate his opponent’s achievements.

The writings collected in this volume include previously unpublished material as well as the first and final drafts that Taubes prepared for publication. They span the period from 1942 to 1987. For the first time, English texts are translated into German, thus making them accessible to a German-speaking audience. These texts serve as an introduction to Taubes’ eschatological and gnostic thinking while also expanding on themes that Taubes explored in his other published works. The collection includes congress speeches, radio lectures, essays, forewords, interventions, book reviews, and appraisals of other authors.

See also:
Jacob Taubes: APOCALYPSE AND POLITICS. Their interaction in transitional communities. Undated manuscript in English (original version) of “Apocalypse and Politics,” probably from the late 1960s. Published by courtesy of Ethan and Tania Taubes of New York, in: ZfL BLOG on November 22 2017.

“Apokalypse und Politik not only bears witness to the partisan’s masterful skill in plotting (against) history, but it also hints at how demanding it is to live as ‘the partisan of Saint Paul.’”
Hyowon Cho, arcadia. International Journal of Literary Culture 53.1 (2018) 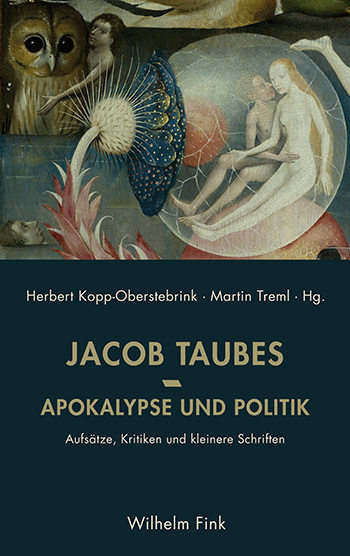