Salmen Gradowski was a member of the “Sonderkommando” of Auschwitz—a group of (not exclusively) Jewish inmates who were forced to accompany the victims to the gas chambers and burn the bodies following their gassing. Some of these inmates wrote on these crimes in minute detail and buried their accounts across the area of the camp. The first, incomplete part of Gradowski’s record, a piece of writing hidden in a bottle, was found at the extermination camp Birkenau in 1945 by Red Army soldiers. It was first published in Warsaw in 1969. The second part, which was hidden in a tin can, was found by a Pole and sold to Chaim Wollnerman, who lived in Auschwitz and emigrated to Palestine in 1947. There, he published the testament privately in 1977. Now, for the first time, Gradowski’s collected texts have been translated into German and published in this volume.

Gradowski’s testimonies are almost unbearably meticulous pieces of writing composed in a hauntingly powerful language. In the midst of the catastrophe that he is forced to endure and knowing that his words will only ever reach God and future generations, Gradowski attempts to interpret his personal as well as the collective experience of the Shoah as human history. In order to give a voice to an irreconcilable grief, he draws on the liturgical repertoire spanning lamentations and apocalyptic writings, but also modern Yiddish poetry. As both a literary document and a historical testament, Gradowski’s accounts are an exceptional testimony to one of the darkest times in human history. 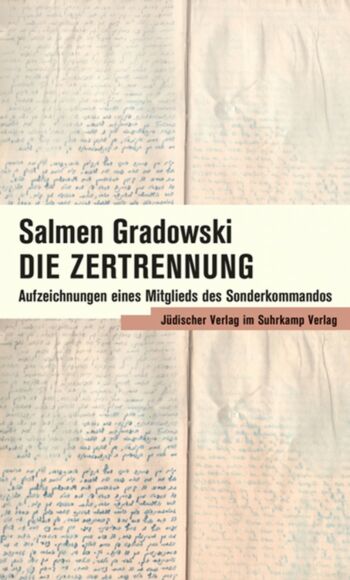