In Germany, the political theorist and historian of ideas Judith N. Shklar (1928-1992) was for a long time known almost exclusively for her book On Injustice, translated into German in 1992. In the USA, on the other hand, the slogan “liberalism of fear” was regarded as the summa of her work. A selection of her writings published in 1998 laid the foundations for broader academic reception. Initially slow to take off, it has reached a new phase in recent years. Today, one can even speak of a cautious canonization of Shklar. For example, there have been several new translations of her work into numerous languages. Moreover, an estate edition like the recent On Political Obligation that makes Shklar’s last ever lecture accessible, would have been unthinkable a mere ten years ago.

Read the full text version of the Editorial by Hannes Bajohr, Rieke Trimҫev [in German, PDF] 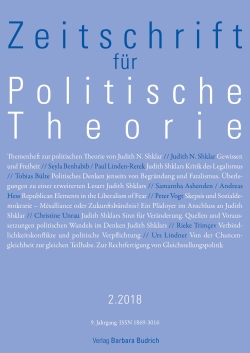