Around 1800, the conviction that language was not merely a tool for expression, but rather an “organ shaping thought” (Wilhelm v. Humboldt) lead to a reflection on linguistic representation in science. In the German tradition, the close relationship between message and expression almost inevitably brought science closer to literature. An interesting paradox characterized the scientific self-image. Language is used to legitimize the scientistic claim of research programs and to present them as highly specialised, with their own specific discourses and terminology. At the same time, however, the ideal audience must always transcend the boundaries of such specialised discourses. J. G. Fichte, for example, rejects accusations that his “Science of Knowledge” is “incomprehensible” as an implicit desire for “shallowness” on the part of the reader. And yet, he expects no less from his scholarly audience than to contribute to the “progress of the human race.”

The volume thus examines the relationship between scientific self-understanding and scientific language usage in the German-speaking world around 1800. It discusses the re-founding of the university, the fraught relationship with rhetorical tradition, the presentational impact of scientific speech, and the political implications for audiences of this discourse. 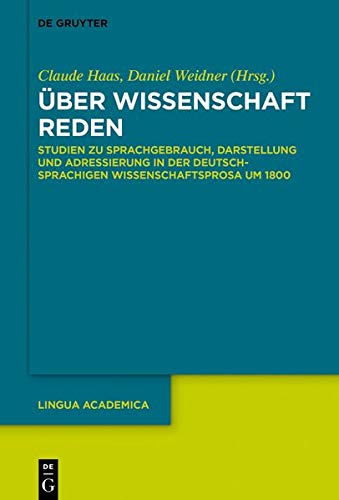