Sound Writing
Experimental Modernism and the Poetics of Articulation

Avant-garde writers and artists of the 20th century radically reconceived poetic language, appropriating scientific theories and techniques as they turned their attention to the physical process of spoken language. This modernist “sound writing” focused on the bodily production of speech, which it rendered in poetic, legible, graphic form.

Tobias Wilke considers sound writing from its inception in 19th-century disciplines like physiology and experimental phonetics, following its role in the aesthetic practices of the interwar avant-garde and through to its reemergence in the postwar period. As modernist writers aimed to capture the acoustic phenomenon of vocal articulation by graphic means, their projects revolved around the possibility of crossing over from the audible to the visible, from speech to notation, from body to trace. Employing manifold techniques and concepts, this search transformed poetry into a site of far-reaching linguistic experimentation. Considering the works of poets, theorists, and artists—including Raoul Hausmann, Kurt Schwitters, Viktor Shklovsky, Hugo Ball, Charles Olson, and Marshall McLuhan—Wilke offers a fresh look at the history of the 20th-century avant-garde.

“This excellently researched and lucidly written study will make a substantive contribution to modern literary studies. Through wonderful formulations and analyses, Wilke illuminates fascinating technical innovations in sound writing and links them to poetic engagement and practices. This is in every respect a delightful and important contribution to modern literary and cultural studies.”
Johanna Drucker, author of Inventing the Alphabet
“Sound Writing presents a new understanding of what is often called the ‘nonsense poetry’ of the early twentieth-century avant-garde and its intellectual background, as well as its echoes in later avant-gardes. In telling this story, Wilke draws on underexplored sources and draws out new causal lines. With language poetry, translingualism, collage, conceptual writing, and artificial intelligence on our minds, the topic of the book cannot be ignored, and Wilke’s contribution is sure to be widely read and discussed.”
Haun Saussy, author of Are We Comparing Yet? 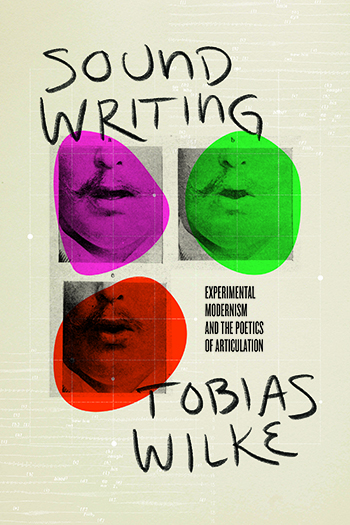