Katrin Solhdju, Alice Rivière
With a foreword by Alice Wexler and an afterword by Isabelle Stengers, translated by Damien Bright

Testing Knowledge
Toward an Ecology of Diagnosis, Preceded by the Dingdingdong Manifesto

The book pursues the question of taming the violence of the new species of medical foreknowledge represented by genetic testing. Adopting historical and epistemological perspectives on diagnostic situations, including observations from anthropological field research, speculative storytelling, and ancient oracles, Testing Knowledge proposes a new ecology of predictive diagnostic gestures, which potentially concern us all.

Testing Knowledge is preceded by the Dingdingdong collective’s Manifesto (2013), which tells the story of the young Alice Rivières, who in 2006 took the presymptomatic, genetic test, foretelling her that she will eventually develop Huntington’s. Her first-person account of the revelation of her test results, which she experienced as an act of poisoning or cursing, pulls the reader into the manifold ethical, psychological, and existential issues inherent to medical predictions.

Testing Knowledge is also preceded by a foreword from Alice Wexler, author of Mapping Fate: A Memoir of Family, Risk, and Genetic Research, and is followed by an afterword by philosopher Isabelle Stengers. 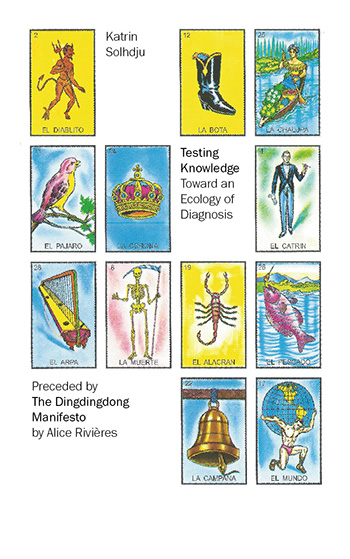