Letters from and to Jacob Taubes 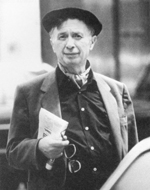 The philosopher of religion Jacob Taubes (1923–1987), who published only a single book during his lifetime, was an outstanding project maker and networker whose thinking has generated enormous international interest in recent years. Taubes’ correspondence thus exemplifies both artistically and theoretically the concept of an ‘open work.’ Since 2004, the ZfL has held a collection of over a thousand letters from and to him, as well as an extensive collection of further documents. The only one of its kind worldwide, it forms the basis of a series of editions  of Jacob Taubes’ letters.

Taking into account questions of editing and archive theory, such as those raised by Jacques Derrida in Mal d'Archive when he merged biographical with judicial, scientific with administrative purposes, the archive is understood as a central model: as an institution, but also as a “thought image” in the sense of Walter Benjamin. The published editions of his correspondence thus facilitate the reconstruction of the central ideas in Taubes’ work. By reassembling the parts, long dispersed over the world, they convey far-reaching insights into the central constellations and controversies of an intellectual history of the Federal Republic of Germany from 1948 to 1987, extending extraterritorially to New York, Paris and Jerusalem. Not least, they are a living expression of the culture of German Jewry after the Shoah.

Sigrid Weigel: Discovering a Fascinating Author. Introduction into the Life and Work of Susan Taubes

Jacob and Susan Taubes and Their Circles