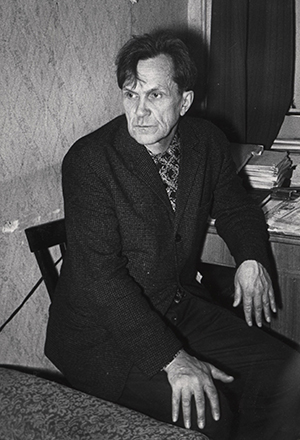 This project focuses on the publication of a monograph on the Russian author Varlam Shalamov (1907–1982), who has moved into the international spotlight in recent decades.

In 2007 the publishers Matthes & Seitz Berlin began the multivolume collection of Shalamov’s works with Erzählungen aus Kolyma 1 – Warlam Schalamow: Durch den Schnee [The Kolyma Tales 1 – Varlam Schalamov: Through the Snow]. The collection, translated by Gabriele Leupold and edited by Franziska Thun-Hohenstein, promoted the discovery of a great author, whose role in academic debates around the world about writing “after Auschwitz” and “after the Gulag” ought not be overlooked. The complexity, poetic intensity, and laconic tenor of the more than 150 Kolyma Tales in the collection make Shalamov one of the most unconventional literary voices of the 20th century. However, there is to date no comprehensive, scholarly presentation of his body of work (not even in Russia) that does justice to the complex interconnections between his biography and poetics, while also taking into account the cultural-historical conditions of the Soviet Union during his lifetime.

This project will address this lacuna by examining Shalamov’s body of work (with special attention to his prose) and the problem of narrating human life after Auschwitz and after the Gulag. The project integrates multiple research perspectives, including philological and biographical approaches as well as ones from literary studies and cultural history. In terms of the complex relationship between life and writing after the Gulag, this project tracks Shalamov’s use of literary form to analyze his oeuvre and his aesthetic explorations from the 1920s/1930s to the 1970s. His extremely fragmented life and the socio-cultural context of the Soviet Union also inform the analysis of his works. In the monograph, these caesuras will constitute the points of departure from which the various stages of Shalamov’s intellectual biography are then reconstructed, using the poetics of his literary texts as a basis.

Franziska Thun-Hohenstein: “Writing Life.” Experiences from the Work on a Biography of Varlam Shalamov