Laws of Transgression
The Return of Judge Schreber

Laws of Transgression offers multiple perspectives on the story of Daniel Paul Schreber (1842–1911), a chamber president of the German Supreme Court who was institutionalized after claiming God had communicated with him, desiring to make him into a woman. Schreber was not only a successful judge, but was also to become the author of one of the most commented upon texts in psychiatric literature, Memoirs of My Nervous Illness. Published in 1903, this remarkable work documented Schreber’s visions, desires, jurisprudence, and theology. Far from ending the judge’s legal investments, it manifested an intensification of engagement with the law in the attempt to prove that becoming a woman did not deprive the judge of legal competence.

Schreber’s experience of bodily change and his account of interior life has been the subject of more than a century of psychoanalytic and medical scrutiny. With the contemporary trans turn, interest in the judge’s desire to become a woman has intensified. In Laws of Transgression, Peter Goodrich, Katrin Trüstedt, and contributing authors set out to unfold Schreber’s complex relation to the law. The collection revisits and rediscovers the Memoirs, not only in its juridical and political implications, but as a transgressional text that has challenged law and heteronormativity. 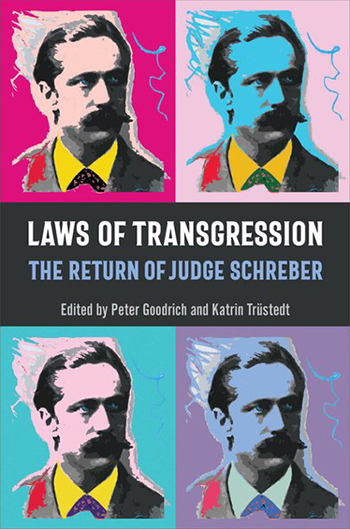